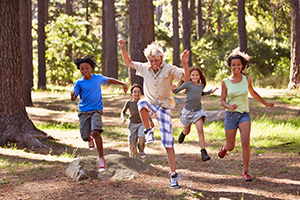 It’s well known that people feel restored after spending time outdoors in nature. A walk in the park helps reduce stress, elevates mood, and calms the mind. This seems to be especially true of children who have Attention Deficit Hyperactivity Disorder. Research has shown significant reductions in ADHD symptoms when children with ADHD spend time outdoors. Several follow-up studies have backed up the results and given insight into why being outside helps the brain focus.

A University of Illinois study had parents of 322 boys with ADHD and 84 girls with ADHD answer survey questions about their children’s after school and weekend activities, some indoors and others outdoors. Parents were asked to report on presence of ADHD symptoms after the activities without knowing what the study was attempting to measure. Although researchers suspected the children would experience symptom relief, they were surprised at how much relief they obtained after playing outdoors.

Researchers found that after spending time in a natural setting outdoors, children were calmer, had improved concentration, could follow directions better, and had less trouble sleeping. These benefits were only present when the children spent time outdoors, not when they spent their leisure time watching television or playing video games.

Indoor settings like school and home require more focused attention than outdoor settings. Long periods of concentration cause mental fatigue that only a change in setting and rest can relieve. Being outdoors gives the brain a rest and restores concentration powers in a way that indoor rest does not.

According to Dr. Frances Kuo, one of the authors of the studies, after a period of concentrated attention, “neurotransmitters in the brain’s prefrontal cortex get depleted. If you struggle too long without a break, you experience a condition that might be called ‘attention fatigue.'” Previous studies have shown that being outdoors increases the focusing power of adults without ADHD. The effects appear to be even greater for individuals with ADHD.

Even a Little Bit Helps

The greener and more wild the setting, the more symptoms are reduced. Researchers compared different settings: a treeless basement, an indoor setting near a window, and various outdoor settings. The windowless settings fared the worst while the most wild settings with more trees, animals, and green grass gave the most relief.

Researchers also eliminated the possibility that the types of activities children do outdoors could be responsible for the effect. They tested the same activity in various indoor and outdoor settings and found that the outdoor settings still came out ahead.

Even though wilderness areas are preferable to a sports field, even a little bit of green is better than none. Parents can expose their child with ADHD to green areas as much as possible by taking short walks before homework, driving through greener areas on the way home from school, or having the child sit by a window while doing homework. If a child is having trouble sitting still for an indoor meeting or meal at a restaurant, parents can try taking the child outside for a few minutes, even if the only greenery is in the landscaping. Some is better than none and may help.